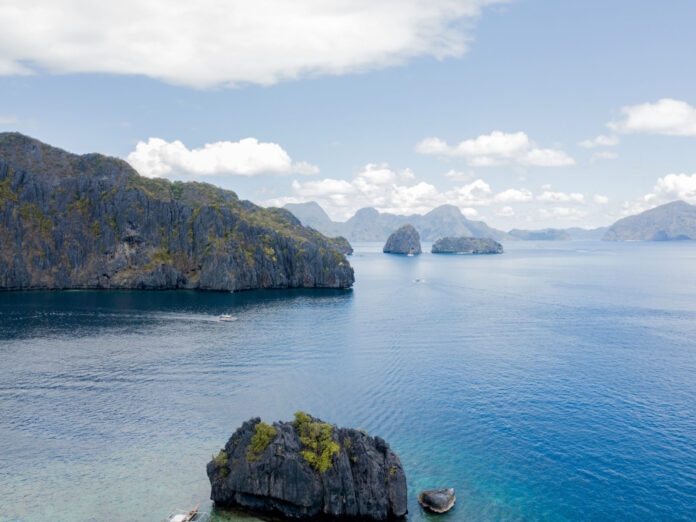 We only had one full day in El Nido so we decided to book the tour A which is the most popular tour. As everyone, we wanted to see the Big Lagoon and some photos from the Seven Commando beach. This tour is a good mix of snorkelling, kayaking and chilling. Unfortunately, we knew that it would be the most crowded tour. Let’s discover the different spots we explored – Big Lagoon, Secret Lagoon, Shimizu Island, Seven Commando Beach. We also explained what to expect if you decide to do island hopping with a group tour or with a private boat.

They explained we will stay between 40 minutes to one hour at each stop. Before joining the first stop, they offered to take picture of us at the front of the boat.

The first stop was the Big Lagoon. It was possible to rent a kayak there for 300 PHP for both of us. It was not mandatory but that’s the only way to really enjoy this spot as it is quite large.

It was amazing. This is our favourite spot of this tour :). The kayak experience was really fun. We were almost the only group when we arrived so we manage to get some pictures with almost nobody.

The second stop was the Secret Lagoon. It was a disappointment. Don’t take your snorkelling gear as there is nothing to see. We waited about 15 minutes to enter into the lagoon but it is small and not really spectacular. The beach outside of the lagoon is more interesting. We don’t have photo as we had to swim from the boat to the beach and we didn’t want to check whether our phone was waterproof or not.

Then we had our lunch at the third stop – Shimizu Island. But we were also disappointed because there were at least one dozen of other boats already on the beach. So the captain decided that we will stay on the boat for the lunch. Luckily we had the drone, so we could see a lot more than by staying on the boat! The video are really gorgeous ! The lunch was okay.

Then, direction to the next stop, which was not far away from the entrance of the Big Lagoon. They didn’t give us the exact name of the spot. But it was a great one for snorkelling. We stayed there about 40 minutes. There are some fishes but much less than in Coron or in Moalboal.

The last stop was Seven Commando Beach. It is quite a large beach, with fresh shakes and juices and also 2 volleyball courts. It’s quite crowded and people are staying there to chill. We stayed there more than one hour. The beach is only 15 minutes from the port.

Island hopping with a Group tour or with a private boat?

This group tour was a bit like a factory for tourists, a big boat with almost 20 tourists on board. It means that at each spot we had to wait for others when they were not coming back on time. There was no space for lunch on the beach so we had to lunch on the boat, the food was so so, fish undercooked, chicken curry with plenty of bones… We also wished the tour was leaving earlier than 9.20 am 🙁 !

If you are not on a budget travel and you can afford to get a private boat, it might be worth to do a private tour in El Nido. If you do so, we advise not to duplicate the tour A. On the opposite it is better to choose a combination of spots from the different tours and to add some private spots if possible.

We decided to do a private island hopping tour in Coron instead of El Nido, as it is much more affordable and you can enjoy empty spots, there are definitely less tourists in Coron. See our post Island hopping with a private boat in Coron, which described our hectic day :).

El Nido and the most beautiful beaches on Earth: Corong Beach, Nacpan Beach and Tour A

How to budget your trip in the Philippines?

How to plan your first visit of Edinburgh?

Complete itinerary for 2 weeks in the Philippines

The Blue Lagoon: Our experience & some tips to prepare your visit

How to visit Bergen in one day? Our top 5 activities

ALWAYS READY TO CHECK-INTRAVEL BLOG
Facebook
Pinterest
We use cookies to ensure that we give you the best experience on our website. If you continue to use this site we will assume that you are happy with it.Ok